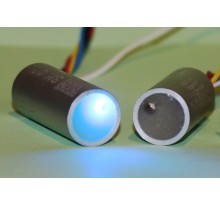 Remove the catalyst and rear lambda using electronic simulator - emulator. Now
you do not need to buy a catalyst!
Waterproof performance, adequate price at high quality, simple
installation, and there are video tutorials. 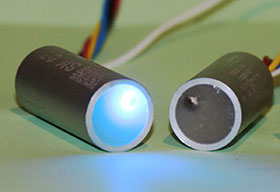 Emulator (electronic simulator), usually
is to be installed after catalyst removal or in case of failure of the rear lambda probe (sensor)
B * S2. The emulator processes the signal that comes from the lambda sensor. This
microprocessor device generates signals for the correct operation of
the engine control system in conditions when the catalyst is removed or defective. A converted signal from the emulator
in such a form as from a serviceable catalyst converter
is sent to the electronic control unit (ECU) input. Thus, the ECU considers that the automotive catalyst
works properly and its replacement is no longer required, it is replaced by a casing catalyst
or a flame arrester (Stronger).
The emulators offered by us are a fully operational device and have a waterproof casing filled with compound. Emulators are supplied configured by default.
This lambda sensor emulator is suitable for all types of cars. When buying it, a guarantee for the re-sult of 2 years is provided. It is possible to adjust the parameters without a computer - with a magnet.
In order to ensure compatibility with all the petrol cars, we produce 4 types of emulators: SK-02, SK-06, SK-07, SK-08. You can choose the emulator by the brand of the car at the top of the page. Almost all emulators have the ability to adjust (if necessary) to achieve the best result, for example, to save fuel or on “complex” cars.


Why the catalyst emulator? 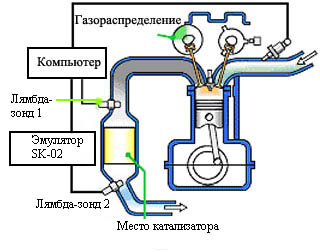 The emulator offered by us, in addition to the replacement of the catalyst in all technical parameters, allows to achieve the following advantages:

Mechanical simulator of the catalyst for the second
lambda often works incorrectly, so the engine enters in emergency mode
or increases fuel consumption. In contrast, the electronic catalyst
emulator delivers a converted signal to the ECU, which exactly advises the signal with the
functional catalyst, and the engine will operate in normal mode. We made sure
that the emulators are working absolutely perfect on all cars by splitting them into several groups.
To install the catalyst emulator (lambda probe) it is necessary to carry out a number of simple works
to remove the existing catalyst and to install a replacement in the form of a microprocessor
device (simulator). In some cases, the removal of the catalyst is not necessary, but
its recommended.
On most of the cars, the electronic simulator of the catalyst can replace even the rear
lambda sensor.

Learn more about the possibilities of the catalyst emulator

Algorithms of a signal processing in the modern cars are becoming more
demanding. Therefore, our emulators are able to emulate about two dozen
parameters. Here are some of them:

Why is the catalyst is so short-lived?

The catalyst (catalytic converter) is a device in the exhaust system of the car, which con-tains a small honeycomb structure covered with a thin platinum-iridium alloy, thanks to the which oxidizes gases and the burning of unburned fuel.
The main reason that causes the catalyst converter malfunction (in some CIS countries for example) is the poor quality of petrol. The combustion process of low-quality gasoline is slowed down, so the fuel-air mixture in the engine does not burn wholly, its remains burn directly above the surface of the catalyst. Since the catalyst has a honeycomb structure, this one is going to melt over the time and clog, so an additional barrier to exhaust emissions is created, which reduces engine traction.
However, this is not the worst thing. Once the engine is stopped, one of the valves of the gas dis-tribution system in the cylinders remains open and the excess pressure in the system prevents the ex-haust gases from coming out. The exhaust gases, together with the ceramic particles from the catalyst, can return to the engine and settle in the combustion chamber and on the piston, mixing with the oil. As a result, an abrasive mixture is formed, which significantly accelerates engine wear.

How to determine the breakup of catalyst?

1. Is it really working? - Yes, we give a guarantee for the result of 2 years. In the set altogether with the emulator you will receive a manual and a warranty card. The law also gives the right to return the goods within 2 weeks without explanation.
2. Will I be able to get support? - Yes, you can consult by phone, Skype or e-mail. All the issues could be solved.
3. What emulator is needed for my car? - At the top of this page there is a form of emulator selection by car.
4. Where can I install the emulator? - With our representatives. Any automotive electrician will also be able to install it.
5. My rear lambda sensor doesn’t work. Can the emulator get around it? - Yeah, it may happen on all cars. If the front lambda is broadband, with a current signal (AFR, LAF sensor), then the SK-08 emulator is installed. If the rear probe is faulty, the signal for the emulator is taken from the front probe. If in the rear lambda sensor is defective the heater, then instead of the heater is additionally connected a ground-ing resistor of about 10 ohms and power of 10 W. But on many cars this function is performed well with a light bulb or resistance of even 75 ohms and with less heating.
6. Is it possible not to remove the catalyst? - Its possible if its mechanically whole (not melted, does not ring, motor traction is normal) and front lambda with signal 0... 1 volt (exceptions in the previous question). The reference signal for the emulator in this case is taken from the front lambda.
7. Is it necessary to put a flame arrester? - Not necessary, but desirable. It only affects the exhaust sound. Without a flame arrester exhaust will not get burned quickly (common opinion), because after a good catalyst the temperature is always higher than before. We drove in earlier times without a catalyst...
8. Will the cost decrease after installing the emulator? - If you have an overcharge now, it should be reduced. On Euro 4 and 5 cars, the rear lambda feels in the preparation of the fuel mixture and the con-sumption directly depends on the condition of the catalyst. On Euro-3 and lower vehicles, the consump-tion may be reduced by switching the engine from the emergency mode to the normal mode. Consump-tion can also decrease if you had a melted catalyst.
9. Why is the emulator better than software removal? - The car continues to drive on the factory pro-gram, no interference in the engine control unit is made. Illiterate software removal can lead to the fact that the malfunction lamp on the dashboard will never light up at all, which means untimely troubleshoot-ing could lead to an engine conk out. With software removing, the engine may change operating modes and no one knows how it will affect it.
10. I have autogas system installed, and constantly there is an error on the catalyst, nobody can do anything to help me out... - We often face this problem. First of all, you need to try to go on gasoline. If there is no problem on gasoline, the problem is the autogas system. Read more in this article.

Differences of our catalyst emulators

We divided the emulators into several types in order to cover all known cars. Differences of emula-tors in internal algorithms of performance, mixture and execution. We recommend that each emulator to be installed on specific types of vehicles, but this does not mean that it will not work on other cars.
The emulator algorithm is constantly being improved. The last changes in the algorithm are of october 2020. 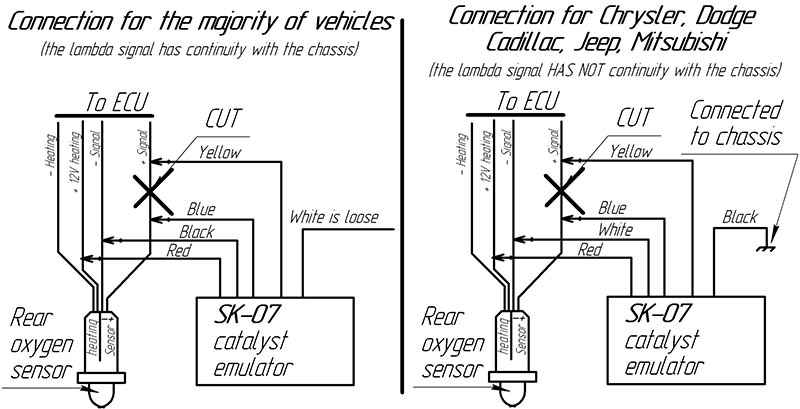 You can read all the details of the installation and replacement in the instructions.
The blue and yellow wire should be connected to the lambda signal wire break off. On this wire, the voltage is in the range from 0.1 to 1 V.
And this should be the end of the replacement procedure.

The video about connecting the SK-02 emulator to European Cars

How to switch programs to the SK-07 emulator

Here you can buy a lambda sensor emulator, which extinguishes the error p0420, read reviews, buy an electronic emulator.