Due to fierce competition and tightening of the environmental standards the auto manufacturers forced to improve their cars constantly. The engines, equipped with a carburetor, do not provide the desired efficiency, environmental compatibility and capacity of the car. This is due to the impossibility of accurate adjustment of the carburetor in various modes. Therefore, the producers introduced as soon as it was possible the electronic system of injection control running under 8-bit microprocessor with a stroking frequency of 4 MHz in 1979. This happened 8 years later after the world's first 4-bit microprocessor 4004. At this point, the engine control system is quite complex in terms of the number of sensors and acting mechanisms, complex mathematical models recorded in the form of the control unit program.

The transition to the processor control system has become possible not only because of the emergence of the microprocessor. The experience in building of automation systems in industrial enterprises, accumulated over decades, was also useful. At that time, at the universities appeared the subject, without which the automation of processes is impossible. Its name was Automatic Control Theory (ACT). Automatic Control Theory (ACT) is a science that allows to calculate the level and speed of influence at once on a number of elements of control to obtain the predictably accurate results in the assigned amount of time. The theory of engine control was also based on Automatic Control Theory (ACT) for the industry. In the process of the development of electronic engine control system, its accuracy and with it the engine performance were improved. In order to follow the increasingly stringent economic and ecological parameters the number of nodes of the engine control system is increased, the accuracy of their production is improved, the computing capacity of the engine control units is increased. This allows using of more accurate and complex models of control and mathematics.

Why is there a need in the oxygen sensor? 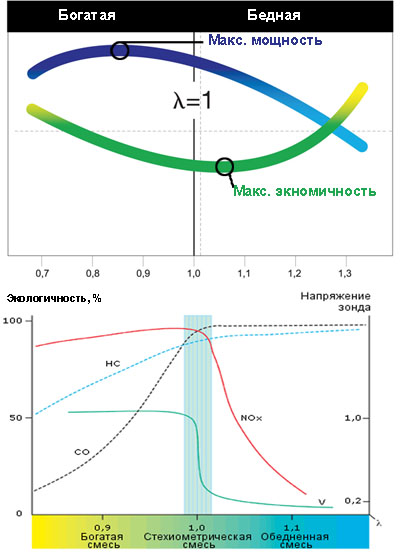 The oxygen sensor allows to continuously monitor the amount of oxygen in the exhaust gases and to introduce the adjustment of fuel injection for the achievement of the best efficiency and environmental compatibility of the engine.

The most popular option is a zirconium oxygen sensor, which provides a signal of poor or rich mixture. If the mixture is rich the oxygen sensor will give the voltage of more than 0,45V, if the mixture is poor - less than 0,45V. The concept of poor and rich mixture is associated with ratio of the mass of intake air into the engine cylinders to the mass of fuel. Conventionally, the ratio is expressed as the number of oxygen (level of oxygen excess). For example, when the number of λ (lambda) = 1, the mass ratio of air to fuel mass is14.7 kgof air/1 kg of fuel, which is the most environmentally compatible ratio. This proportion is also called "stoichiometric mixture".

Thus, in a simple control system with the oxygen sensor, the composition of the fuel and air mixture fluctuates constantly near λ = 1. This is due to the fact that the control system is trying to reach to the maximum the λ = 1 and the sensing element of zirconium oxygen sensor can only show more or less.

Zirconium oxygen sensor has some important parameters that are used in more advanced control systems in order to meet the environmental standards Euro-4 and above. For example, by the internal resistance of the sensing element, by the output voltage and comparing these parameters with the other parameters of the system, it is possible to judge the concentration of harmful chemical components in the exhaust (CH, CO, H2) and a temperature of sensing element of the oxygen sensor. Thus, the measures of improving the environmental performance of the engine can be taken by control system.

There are 2 main types of broadband oxygen sensors, which differ on the principle of information readout.

The principle of operation of these sensors is described in detail in many sources. Therefore we will not dwell on it.

In order to understand the meaning of the rear oxygen sensor, we will briefly dwell on the work of the catalyst. The automobile catalyst is a device that converts the exhaust gases to a relatively harmless condition. Mainly the fuel, which was not fully burned in the engine, is burned in the catalyst (2CO + O2 → 2CO2) and there also occurs decomposition of nitric oxide (2NOX → XO2 + N2), which is produced at combustion temperatures above normal and an excess of oxygen. The Reactions are possible in the neutralizer when its temperature is about 300 to 800 degrees. Also its performance and service life are strongly affected by the composition of the fuel and air mixture, which is maintained by the front oxygen sensor. If the fuel mixture is richer, the efficiency neutralization of CO and CH drops, if it is poorer - NOX. 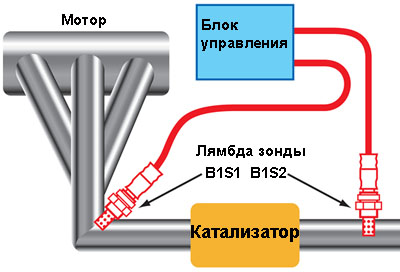 To make a car always meet the standards of Euro-3 and above, the controlling sensor that "tells" the driver about the failure of the catalyst was introduced in the exhaust system after the catalyst. In this case, the indicator “Check engine” lights on instrument panel, and the engine will go into the emergency mode.

Work of the rear oxygen sensor

The catalyst produces the decomposition of nitric oxide to nitrogen and oxygen.

The binding of free oxygen with the unburned fuel (from CO obtain CO2) is produced. Many other complex reactions run also in the catalyst.

As it appears from abovementioned, the oxygen amount after the catalyst is considerably smaller than its amount before the catalyst. The ability of the catalyst to store and release oxygen determines the persistence of changes of oxygen after catalyst. Therefore, the main indicator of the working catalyst is the prevalence of tension from the rear oxygen sensor more than 0.6 V, even if the voltage of the front oxygen sensor is at a low level for considerable time.

The indication of normal operation of the catalyst meeting the standards of Euro 4 and above is maintenance of the pressure on the rear oxygen sensor in the range of 0,6 ... 0,7 V at the stable work modes. At this, the fuel adjustments on the rear B1S2 and front B1S1 oxygen sensor should be about 0%. If the catalyst malfunctions, the fuel adjustments on rear and front sensors may significantly differ from zero. 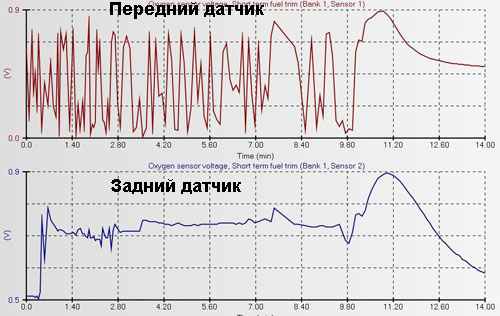 Based on the above, it means that modern engine control system can not only maintain the oxygen concentration at the catalyst. Additionally, the temperature of the catalytic converter is maintained in the required range, the content of other impurities is indirectly monitored and maintained after the catalyst.

Unfortunately, the catalyst has a limited resource. And in that moment, when the car owner faces the problem with the catalyst, he or she has the choice: to buy a new catalyst or solve the problem in another way. Looking at the smoking pipe of the plants and the cost of the catalyst, of course, our man will consider an alternative. It is not easy to deceive the control unit on modern cars, because many parameters with the narrow range are involved the process. Therefore, traditional methods in the form of spacers and resistors with condensers are no longer suitable. Even if these methods work on some cars, it inevitably increases fuel consumption. Because of this, manufacturers of catalyst emulators continuously improve the algorithms of emulation for the most accurate recreation of all required parameters. In modern catalyst emulator, approximately 10 different parameters are emulated: voltage in different modes, dynamic parameters, amount of stored oxygen, catalyst efficiency, internal resistance of the sensor, impedance, cut-off time, response to maneuver of the accelerator pedal, temperature of the catalyst, warm-up mode, response time of the sensing element, change of catalyst efficiency at the load changes.

A common problem is the instability of the gas injector work. It cannot be detected though conventional methods. 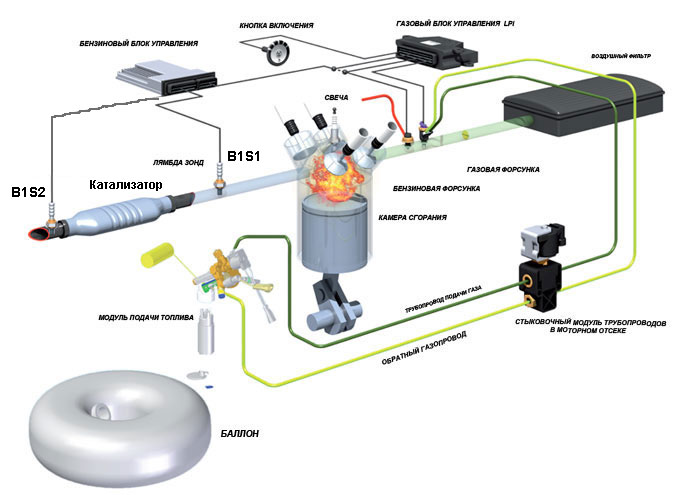 The problem with gas injectors often occurs due to the instability of their work, parameter spread. The most common are sticking of injectors and variation in performance. We determined all parameters with special tester for gas injectors.

It is worth to be mentioned that modern management system is very demanding of the parameters of all links, so even a slight variation in injector parameters leads to unpredictable results. The parameter spread may be the reason why control unit cannot adequately adjust fuel corrections. The most efficient operation of the engine running on propane is possible with earlier angle of ignition and a more poor mixture with a ratio of 15.5 : 1 for propane in comparison with the mixture for gasoline 14.7 : 1. When standard scheme of natural gas equipment of 4th generation is used, the mixture control is carried out by petrol control unit; the gas control unit only makes adjustments to control gas injectors.

In this regard, when running on gas, the mixture is maintained on gasoline standards, and this leads to abnormal operation of the catalyst and more rapid destruction of it.