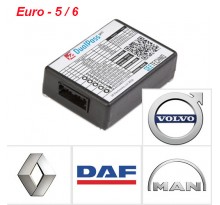 The emulator from the developer has clear advantages over the Chinese fakes. Read about it below.

The Chinese urea emulator does not work? That way.

Selection of the emulator for the car is given above.

Urea and NOx – shutdown by means of the Adblue emulator

The original urea emulator, does it make sense to pay more? Differences of original emulators from fakes are given below. Draw your own conclusions …
1. The latest version of the software allows to save fuel (by what means – read below)
2. The latest version the software excludes emergence of error codes, early errors in a firmware of emulators are corrected
3. Some emulators have the built-in diagnostics and the miniscanner
4. The emulator can't be found by the diagnostic scanner.
5. In the CIS countries there is only one developer of urea emulators. All Chinese and other copies have an outdated firmware of 2013 with all its shortcomings. The Chinese products besides, have also extremely low reliability.


Original emulators block practically all park of trucks with norms of exhaust gases Euro-5, Euro-6. Also it is at the same time one or two NOx sensors are imitated.
In contrast to copies (fakes).
Volvo (Euro 4, 5, 6)
Renault (Euro 4, 5, 6)
MAN (Euro 4, 5, 6)
DAF (Euro 4, 5, 6)
Scania (Euro 4, 5)
Mercedes (Euro 4, 5)
Iveco (Euro 4, 5)
Ford (Euro 5)
KamAZ
MAZ
Chinese cars: Foton, FAW and others
Asian cars: Hyundai, Nissan UD Truck, Daewoo, TEREX
The same as the other cars as identical modules of a dosage of urea are installed on them.
It is possible to select the emulator according to make of the car at the top of the page (not mobile version of the website).

Economy of fuel by means of the Adblue urea emulator.

Time limit of an exit of the catalyst to an operating mode for minimization of harmful emissions are stated in environmental European standards. Catalytic reaction proceeds only at a temperature at least 3000 С. Therefore, the control unit can give in addition fuel and air for a catalyst warming up.
The new software (firmware) of emulators allows to imitate the accelerated catalyst warming up that saves fuel even in comparison with the regular Adblue module and the NOx sensor.
As we wrote earlier, all copies of emulators have an outdated firmware of 2013. In this firmware temperature of the catalyst isn't imitated and the control unit constantly tries to warm up it, injecting additional fuel.
So, what result in figures at use of the modern original emulator:
Decrease in fuel consumption in comparison with copies – 1 … 5 l / 100
Decrease in fuel consumption in comparison with the regular urea system – 0,5 … 1,5 l / 100
* - These figures depend on vehicle type and service conditions.
On this video the review of the emulators market is made. The example of operation of the emulator with simulation operation of the catalyst and without is shown in the second half of video.

- Cutoff of Adblue urea on the serviceable car won't increase fuel consumption, on disabled vehicle - will reduce to consumption corresponding to serviceable. One of our first developments really could promote increase in fuel consumption since actually were simple caps and broadcast static data in CAN. Exactly these devices haven't been protected properly, copied and now are issued in various execution – by anyone.

Question 3. Can I independently disconnect the SCR system?

At observance of safety measures and having the main knowledge after the auto electrician - cutoff of urea is possible by yourself, for some types of cars. But, nevertheless, the majority of cars possess difficult systems and demand removal of inactive mistakes - we recommend to you to entrust cutoff of urea to professionals.

Question 5. What guarantees do we have?

The guarantee for original urea emulators makes 2 years. We will note that at failure of the installed device, we don't wait for its return, and at once we send you the new, serviceable device.

Question 6. AdBlue system and the NOx sensor is out of order on my car, does it make sense to restore them before switching off??

No, it isn't necessary to restore system. Our emulator works as at the working SCR system, and as at malfunctioning. After installation of the emulator all components of the SCR system can be removed from the car.

Question 7. Does your emulator imitate operation of the NOx sensor?

Yes. On all modes of its work.