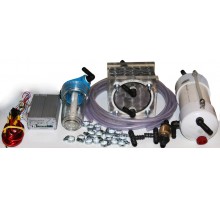 HHO hydrogen generator with a complete set of automation. Generator is able to maintain the fuel mixture, the operating current as a function of speed...

The advantages of this system over analogues:

Principle of operation and appointment

The combustion of fuel in internal combustion engines are not effective. In the best case, the engine car burns only 40% of fuel, the remaining 60% - burning down in the exhaust pipe.

Brown gas generator (the gas is alsocalled: Brown gas, HHO gas, water gas, hydrogen, di-, hydroxide, hydroxide, green gas, Klein gas oksigidrogen) is designed to produce gas, which is used to intensify the process of combustion in internal combustion engines. Due to the intensification of the phenomena of combustion achieved significant fuel savings and increase engine power. Another advantage of this system is to reduce harmful emissions engine, improves the environment.

Brown gas generator SuperAquaCar (SAC) consists of the electrolyzer (the electrodes are made of a special stamp acid-proof stainless steel, electrochemical treatment of the past), a circulating reservoir  management system (modulator) ,  the optimizer fuel mixture (for injection cars). The way the gas is based on the phenomenon of electrolysis water. Circulator tank intended for the qualitative separation of gas from the water, as well as the supply gas generator electrolyte.

In the  electrolysis chemical reactions with the release of hydrogen and oxygen (Brown gas) from a special electrolyte consisting of distsillirovanoy water and catalyst. Chemical formula of our catalyst is that it does not stand out from the gas and remains in the water, which eliminates the chance of getting it into the engine. The resulting gas leaves the tube from the top fitting of the electrolyzer and goes into a separate container - the "water gate", coming from the bottom of it pieces, there is cleansed of the foam and rise above the water level in the form of gas, which implies a vlagoulavlivayuschy filter and through a check valve in the air manifold and into the combustion chamber.Also from the "water gate" water goes to the second tube through the lower fitting back into the electrolyzer, thus is the circulation of fluid through the system.

As a result of combustion gas produced dry steam, which in turn clears the valve-piston group of fouling, improves the heat exchange between the saddle and valve, which increases engine life. Also, due to a decrease in fuel consumption, increased service capability, mileage fuel injectors, reduces sagryaznenie oil in the engine and increased service capability, mileage.

Office of Gas Production produced modulator (PWM), depending on the crankshaft speed and temperature of the electrolyzer. The modulator is an intelligent electronic device, which allows ipolzovat resonance phenomena in the electrolyzer.

Due to the special method of current modulation is achieved by the maximum system performance. It also provides lower power consumption and production of gas at lower speeds crankshaft, this feature prevents battery discharge and unload an electric car. On modern cars reduces power consumption at idle also implies a reduction in fuel consumption as the developing elektoenergii accompanied by an increase in engine fuel, which is used to maintain the nominal rotation frequency of the crankshaft..

As the process of combustion with Brown's gas is improved, for maximum fuel economy of the engine is desirable to adjust the fuel mixture in comparison with conventional treatment without compromising power. In this regard, we have developed optimizer ratio of fuel mixture. Optimiser helps withdrawal of the engine in the most optimal mode when working with Brown's gas, it can be achieved the maximum possible efficiency. To correct the fuel mixture can be applied and chip tuning.

System «SuperAquaCar» can be additionally equipped and other systems for fuel economy, increase the result.

Download the user manual to a set(Format pdf, 3Mb)

System «SuperAquaCar» can be additionally equipped and other systems for fuel economy, increase the result.

Our system of "SAC" is the most effective and safest of all similar systems, in the Ukrainian market through the use of appropriate technologies.

Under development system "SAC" for tractors and other heavy equipment.

You will experience a huge positive, from the recognition of the fact that your car really takes the energy from water - is going on the water!