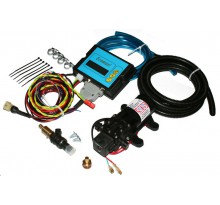 Increasing the boost pressure and a large increase in power 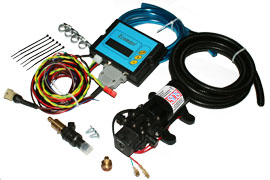 Water injection system allows you to:

The water is fed to the pump with the filter, then under high pressure — blast nozzle. The nozzle is installed on inlet manifold in such a way as to create a fine mixture of water and air. The pump and nozzle receive control signals from the control unit, brain of which is a micro-ECM. Micro - ECM calculates the portion of water individually for each engine stroke. Micro - ECM operates mathematical expressions in which values obtained from sensors and values that were entered in the memory of your system at debugging are substituted.

The maximum efficiency of the system is achieved due to the immediate correction of fuel injection time. The oxygen sensor signal is generated by the block Ecomax-2 so that the vehicle computer normally reacts to interference. 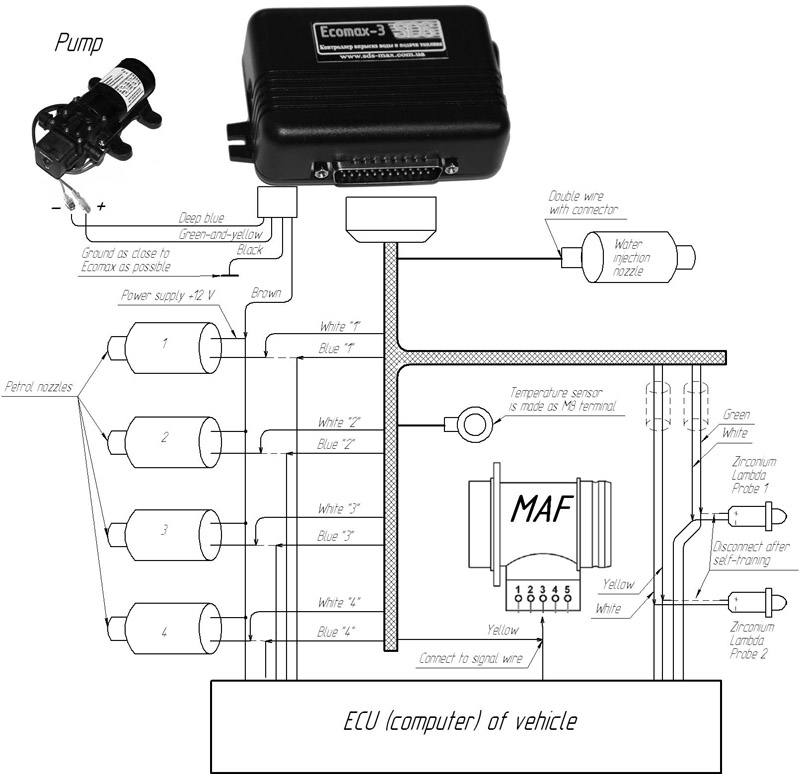 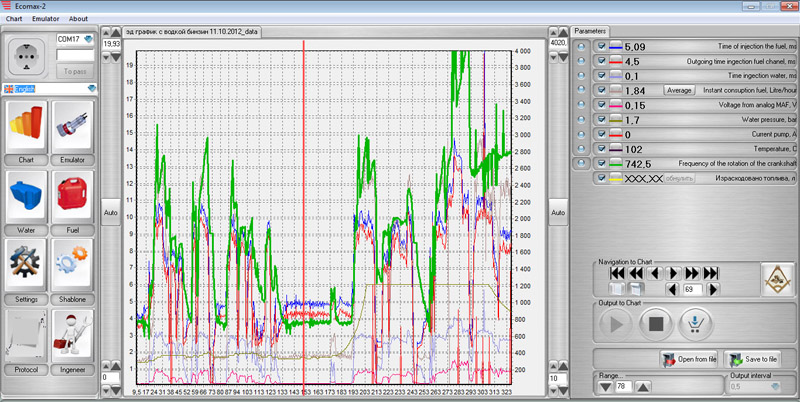 1. Maximum efficiency is achieved when water injection zabednenii fuel mixture up to 50% (when properly configured, air / fuel ratio / water), depending on the combination of factors.

3. Water injection - for forcing the engine is most effective in 50/50 ethanol / water (or methanol) and water. (on recommendation of foreign colleagues)

4. Water injection requires the installation of an earlier firing angle (on 2 - 4 ), as compared to conventional engine. In injection engines firing angle setting is made automatically.

5. Excessive advance ignition timing will cause the fall of power and overheating.

6. Quality of spraying water mixture - is directly related to the effectiveness of the system. Smaller droplets cool the combustion chamber better and more evenly.

* - The effect can be obtained with susceptibility to detonation engine, increasing the degree Burn it, increasing the boost pressure, using zabednennyh fuel mixtures and low-octane gasoline.

In the largest accounts, any conversation on the topic of innovations for the car   You can start with the fact that most of the technologies used today, was known for a hundred years ago (and it's pumping, injection of nitrogen and much more), and eighty percent of the processes occurring in the cylinder, have not been studied to the end and to this day.

As already noted, much of the technology is not new, and the first experiments with injection of water into the engine began in the 1930s (the first patent for such a system was issued in the USSR in 1934!). In those days no one and did not even think about using this technology for added power or fuel economy - experiments were performed in order to avoid the phenomenon of detonation (explosion of the fuel-air mixture in the cylinder, instead of progressive combustion). Around the same time in the United States conducted research on water injection, whose aim is to study the processes occurring in the engine and the use of water injection in aircraft engines. The original research paper can be downloaded HERE . You can also download the original document.

That is to increase the power injection of water, along with injection of nitrous oxide was first used during World War II in aircraft engines. In Germany "on water" flew the famous "Messer" in the Soviet Union - IL, MiG. However, the advent of jet engines did not apply this technology in aviation.

Would have stayed a water injection forgotten if not for the plight of the economy in the postwar years. The system once again began to be applied, allowing the use of gasoline with lower octane without sacrificing engine power. With the development of water injection can be found reading the article The history of water injection

Although we say "water injection", in fact, pure good old H 2 O allows a greater extent, reduce detonation (plus, acting as an antioxidant, prevents deposition of carbon compounds). And now explain why.

Water has a very high heat, thereby reducing the temperature of incoming air, and as we know from school physics course, to squeeze more cold air is required to expend less energy. Vaporized in the combustion chamber, the water increases in volume, and therefore increases the pressure inside the cylinder, and hence observed increase in power.

Useful will remind that nor one system  can be fully used without engine tuning - it or lean, or increase the pressure, or the earlier the ignition. "Sharpened" aircraft engines since Luftwaffe had the device for automatic lean mixture during the water injection . In our case, auto-tuning involved in micro-computer unit Ecomax!, Which calculates all necessary parameters.

And most "tasty" - it is correct installed and configured the system is absolutely safe for the engine! Even more - as already mentioned, the water prevents the deposition of carbon compounds! In short, when all the rot iron, the motor still get your grandchildren.