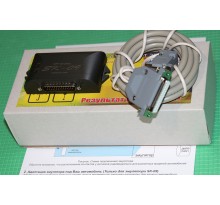 The emulator disables DPF particulate filter without the firmware replacing of the engine control unit.

The emulator allows you permanently solve the problem with the removal of the diesel particulate filter and get rid of the problems associated with it for a small price.
Emulator SK-09 was modified in 2017 of the version SK-05, taking into accounts our and our representatives long-term experience. The main differences of the new models are improved algorithms and the adapting possibility for the car. Now you do not need program the emulator program for a specific vehicle! It will prepare and choose for itself a required program!
There are the following advantages of this method:

The emulator advantages over other methods of particulate filter problems solution

For example, there are some disadvantages of the known methods.
1. The filter rinse: the result will be, but a short time only. You will have to wash again soon...
2. Installation of mechanical trompe l'oeil for creation a differential pressure: it has been worked in some of the first vehicles with a particulate filter (approximately to 2006). Now it is useless because the ECU takes into account temperatures and pressures characteristic behaviour in different situations.
3. You cannot just throw out stuffing. The ECU immediately determines it. A power limit and error codes effect and likely "locomotive" blue smoke appear.
4. Software trip (firmware 'brain' replacing). If the procedure is correct then everything works fine, but who will tell you everything is done correctly or incorrectly. "Wrong" firmware replacing is usually done hacked or "unfinished" programs that can cause the following unpleasant consequences:
- Even in emergency situations, check engine indicator never lights up, and you will know about the problem when the car refused drive only;
- Some car features such as cruise control, etc. may refuse to operate;
- We are faced with situations where you even replace firmware, the engine refused to work properly.
5. Forced regeneration often helps, but for a while. It's time to think about the particulate filter removal.
Emulator deprived of all shortcomings, because you need connect the wires only.

How does it work?

An emulator is a device that generates a sensor signals controlling the operation of the particulate filter so that the ECU thought it was clean.
What options are generated and thereby:

How to check if particulate filter is clogged or is not?

The first signs of a problem may be a loss of power, glowing icons on the dashboard like a spiral, motor icon and particulate filter icon. Typically, the oil level increases because fuel enters during regeneration. It degrades the properties of the oil and can lead to engine failure. Signs of frequent regeneration are increased fuel consumption.
You can check it accurately, using the diagnostic scanner. You can usually see the corresponding error codes, the differential pressure is too high or unchangeable (if a filter crumbled or absent).

If the problem is unfixed timely, it can lead to other unpleasant consequences. For example:

Causes of problems with particulate filter and a warning

The conditions for filter operation provide the strongest influence on the particulate filter resource. More precisely:

How does particulate filter work?

Consider the main points of working the system with the DPF filter. We will not focus on the chemical processes that occur in the particulate filter for improvement readability. We describe all for the average person understanding.
Particulate filter operation is controlled by a pressure sensor and one or more temperature sensors.
During normal operation of the engine, the exhaust gases are first neutralized (neutralized) in the catalyst, and then pass through the small cells of the DPF filter, which hold soot. The differential pressure gradually increased according to the soot accumulation. Due to these processes the temperature of the particulate filter increases. Part of soot can burn during the motion, when the temperature is about 400-500 degrees, and it is called a passive regeneration. Upon reaching a certain threshold of soot accumulation, which is calculated by the ECU, the active regeneration of the particulate filter is run. If regeneration is active, the additional fuel is injected into the exhaust system, the EGR valve is closed, which gives more oxygen (air) to regenerate. Additional fuel supply can be executed by an additional nozzle or the main injector before opening of the exhaust valve. Once in the catalyst, this fuel mixture begins to burn (catalyst raises the temperature even more), and with it, soot burns at a temperature of 500-650 degrees, turning into carbon monoxide CO2. Successful regeneration occurs on average every 500 km. Then the cycle repeats again.
So, as the parameters in the exhaust system depend on the operation mode: