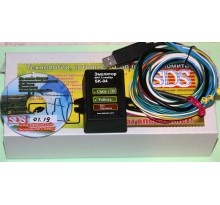 Emulator SK-04 is designed to regenerate (emulate) the signals of oxygen sensors and any other analogue signal within the range 0 …. 5B. There is the possibility to correct the mixture in separate engine run modes with the use of computer. 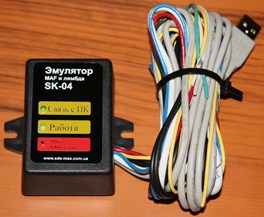 Regeneration of zirconium oxygen sensor signal is made by analyzing the signals of mass airflow sensor (MAF) and fuel nozzle with their subsequent comparison with the table. Basic table is recorded by the manufacturer or during emulator self-learning (Fig. 2). Correction of fuel mixture can be made with the help of emulator features.

By agreement the emulators for titanium oxygen sensor with signal 0….5 Volts may be delivered.

It is possible to switch the emulation tables of oxygen sensor with external switch. It is necessary, for example, when going into high-power or economy mode, propane or petrol (for autogas system).

Regeneration of analogue signal is made according to the three-dimensional map. The table (map) contains voltage values at the emulator output, which are connected to rotation speed, injection time or airflow. This function may be used for MAF signal emulation of sensor even if it is absent. Such an approach allows to remove this sensor. Regeneration of MAF signal is made by converting MAP signal, which is installed is necessary (price of MAP sensor of Daewoo Lanos is around 25$).

SK-04 emulator is completed with the software, which allows to connect it to the computer, to read and record all parameters in real time, to read the fuel consumption, to make setting without engine stopping. The graphical output of data is provided. There is an opportunity to keep and record signal emulation tables (Fig. 1).

The device can work with MAF, having with an analogue and pulse output.

Figure 3. Emulation of MAF analogue signal according to the three-dimensional table.

Figure 4. Emulation of MAF analogue signal according to the two-dimensional table

What does the emulator allow?

·         Availability of fuel economy or power increase under due setting of the fuel mixture;