In the CIS countries, motor gasolines are designated by the letter "A" and figures corresponding to the octane number. For high-octane gasoline it is determined by the research method, as evidenced by the letter "I" in the designation. Abroad, the results of the measurement by the motor method are designated as MON, and the research - RON. The methods differ only in the test conditions: in motor temperature and speed higher, therefore the octane number determined by this method is lower than that obtained by the research method. For example, according to the motor method, the ОЧ Аи-98 would be equal to 88.

Among car owners widespread misconception that "pour liters of the twenty-98th" - a thing is periodically very useful. In fact, the use of fuel with OCH above the recommended does not make any practical sense. On models with relatively simple engines (without a detonation sensor and an automatic correction of the ignition), this does not give any advantages. Many modern cars are designed for various types of fuel with an OCH from 91 to 95 or even up to 98, and on high-octane gasoline their power and economy increase by a maximum of 5%. Alas, the consumer practically has no opportunity to check the quality of the fuel being poured, so that there is no sense in giving any advice on the choice. Here, the only criterion can be only the reputation of a particular gas station.

Power - is the ratio of work to the time interval of its commission. Usually measured in the "Horsepower" (1 hp = 736 watts). 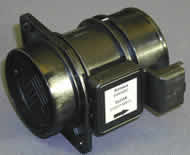 MAF sensor or DMRV Mass air flow sensor at the inlet to the engine. Designed to determine the amount of air entering the engine.

The air flow sensor readings are one of the basic parameters used by the engine control unit to calculate the required amount of fuel and the optimum ignition timing. The sensor is installed after the air filter in front of the throttle in the flow of air consumed by the engine.

The signal from the DMRB can be emulated. In other words, if it is difficult for you to purchase a DMR vehicle, then you can use the MAF emulator.

The sensor of absolute pressure in the intake manifold (MAP - Sensor)

In such systems, based on data on the pressure and temperature of the air in the intake manifold, the engine control unit calculates the air mass contained in each cubic centimeter of the intake manifold. In accordance with the calculated mass of air consumed by the engine, the ECU generates control pulses of fuel injectors of the appropriate duration, achieving an optimum fuel mixture by these preparations.

The oxygen sensor is a lambda probe. The Lambda probe is an oxygen sensor. Designed to determine and regulate the concentration of oxygen in the exhaust gases, the composition of which depends on the ratio of fuel and air in the mixture supplied to the cylinders of the engine. Information, which the sensor gives out, is used by the electronic injection control unit to adjust the amount of fuel supplied. For the complete combustion of 1 kg of fuel, 14.7 kg of air is needed. Such a composition of the fuel-air mixture is called stoichiometric, it ensures the lowest content of toxic substances in the exhaust gases and, accordingly, their effective "afterburning" in the catalytic converter.

Composition of exhaust gases depending on lambda

To achieve the most tangible results when tuning the engine, you can use the graph of the dependence of power and fuel consumption on the composition of the mixture. The graph below is only the key to understanding the process, since the characteristics of the various motors can differ significantly.

Examples of the fuel mixture under various engine operating conditions: 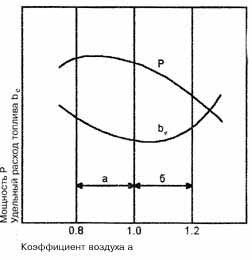 - Cold start. With a cold start and to facilitate the start-up of a cold engine, additional fuel is required at the time of starting (a <1);
- warming up the engine. Due to the fact that at low temperatures the mixture is deteriorated, a fuel film is formed in the intake pipe, which evaporates only when high temperatures are reached. Therefore, at low temperatures, the fuel-air mixture must be enriched (a <1). In engines equipped with a catalytic converter, in the temperature range from + 15 to + 40 ° C the fuel-air mixture is depleted (a> 1). This is done specifically to quickly warm the catalyst to operating temperatures;
- partial loads. For engines equipped with a catalytic converter, at partial loads, the stoichiometric composition of the air-fuel mixture must be exactly maintained (a = 1). For engines without a catalyst, the main criterion for optimizing the fuel-air mixture is the minimum fuel consumption (a = 1.05-1.2);
Full load. With the throttle completely open, the engine must reach its highest torque or maximum power. For this, the fuel-air mixture should be enriched to a = 0.8-0.9;
Acceleration. With the rapid opening of the throttle valve, the composition of the air-fuel mixture is briefly impoverished due to the limited ability of the fuel to evaporate as the pressure in the intake pipe rises. Therefore, to prevent this phenomenon and to achieve good overclocking characteristics of the car, the air-fuel mixture must be enriched (a <1);
- Forced idling. In this mode, the car slows down, moving by inertia. In order to save fuel in a certain range of engine speed, the fuel supply can be completely stopped.